I have now spent three and a half years in the Singapore University of Technology and Design. It is pretty clear what the first qualifier, Technology, is, but the second, Design, is thrown around a lot to finally encompass many different things. This article argues that design is approximately a fancy term for economics. Later on, I ramble on about design and emotional connection with the things around us.

When I was 13, in the last year of middle school, my mother, a fan of Philippe Starck, enrolled me in a weekly class of “Design”. Unsure of what to expect, I obliged and attended for a year along with a few other students. The class taught me a handful of valuable lessons, including the most valuable of all: learning what functional means. Something is functional if it fulfils its function. This simple definition sounds completely tautological, and yet is quite profound.

There is another science is built on scarcity: economics. Design, as economics, is concerned with allocating resources in the most parsimonious manner. A well-designed system may be one that doesn’t waste its resources. When that is too strong an assumption, we could instead define an ordering: a better designed system is one that wastes less resources than a worse designed system.

We can go further and state that technologies are (or should be) “stupid”. In itself, a technology does not have a goal, but that goal is brought by design: its allocation within a system gives it purpose. In itself, a tyre is stupid. But once allocated to the four corners of a car, it is given purpose to support and move the vehicle. Allocating 8 wheels to a regular consumer car would be bad design: it can be done with 4 wheels. Allocating 3 wheels to the same car is also bad design: the car might just topple because it is now unbalanced.

There is one useful side-effect derived from calling technology stupid: it forces us to think what to do with it. Had we assigned a positive value to the tyre in itself, it follows that we should strictly prefer the 8-wheels version of the car to its 4-wheels counterpart, purely because it has “more technology”. This is an exaggerated example for the sake of exposition, but it is not difficult to come up with real world instances.

Take roads: more roads is subconsciously seen as better because it is more technology, but design shows the idea is misguided. More roads usually lead to higher congestion levels simply because the cost of using them – maybe the cost of time stuck in traffic – lowers, increasing demand. Design asks us to consider an alternative, such as pricing congestion to efficiently solve the allocation problem or remodelling the streets with scarcity of space in mind. And this is all economics, because it shares the same problem specifications: the demand for a system needs to be allocated.

The cake is not a lie

Design is then the science of allocating technology. This definition works, but we can add to it. Back in my design class, we spent a few hours talking about what is perhaps the most well-known product by Starck: Juicy, the citrus-squeezer. Its purpose, unsurprisingly, is to squeeze citruses. The clever thing to it, its shape, is not arbitrary: the right angle and slant of the legs forces the juice to drip to the central point at the bottom, where it can be collected. The legs themselves raise the spherical portion where the squeezing happens, and thus provide a comfortable position for doing so. 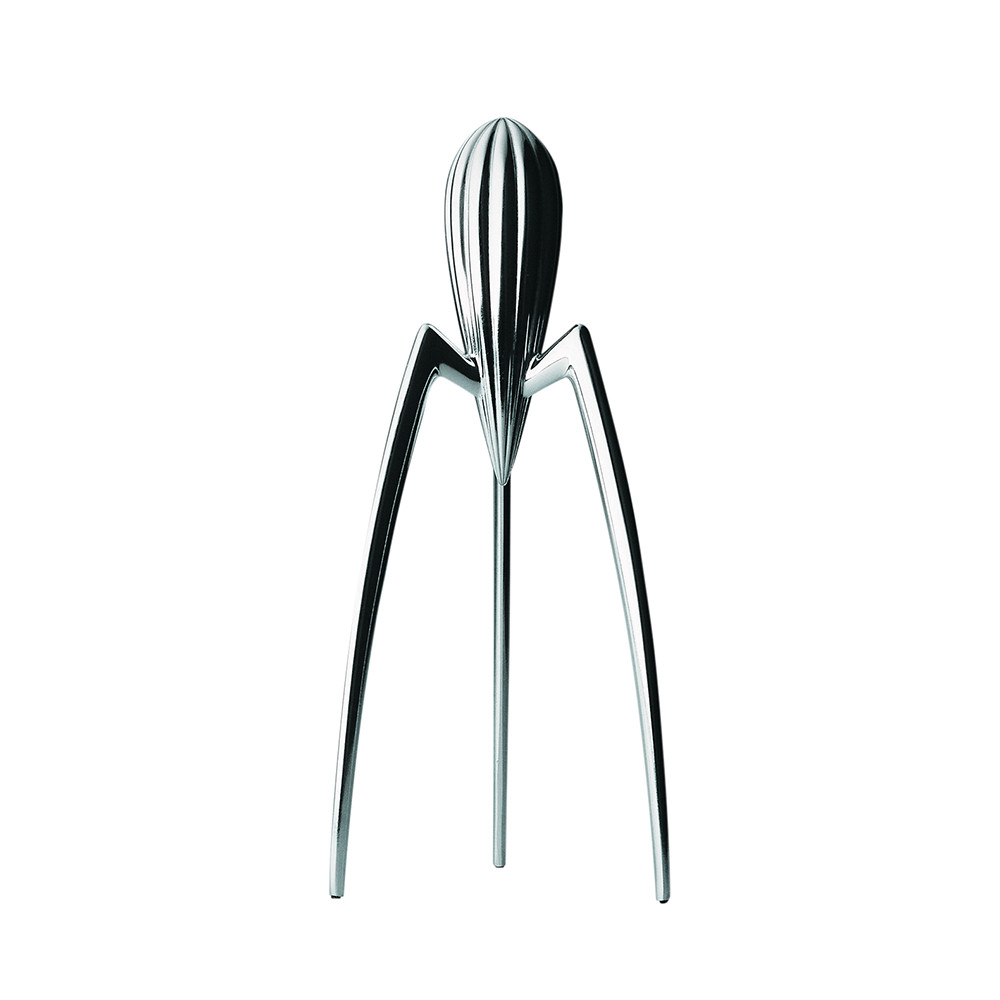 I come in peace to squeeze your lemons…

Is there more to it though? Yes: it is playful. The shape of the squeezer ostensibly looks like one of the invading aliens from H.G. Wells’s War of the World. That makes it “lovable”, human. This is not strictly necessary: that it functions well as a citrus-squeezer is probably enough. But the aesthetic, possibly designed with a pure logic of increasing sales of the product, endows it with something more than its function.

There may be a greater lesson here: to design our systems with the human in mind. It is not always evident (where is the human in packets transiting from one computer to the next?) but it is worth a thought. We ask of our systems first to do what they are supposed to do, to be functional. But a system that is additionally lovable is that much more powerful: it embodies its self-preservation by creating allies in us. This is where user experience starts, with the usual caveats: a great user experience is worth very little unless the system it provides interface to is functional.

I want to point out that the choice of lovable as a description of human-centred systems is deliberately cartoonish. These are the objects or intangible things that ask of us more than a functional interaction, indeed an emotional connection at best. In this light, Portal is an incredible experience that questions the very nature of this inherent – and sometimes inexplicable – emotional connection we create for the systems that surround us. In the cold world of the testing lab where literally every technology in there is designed to kill us with maximum functionality, we are so starved for this connection that we end up forming a surprising bond with a (lovable?) weighted companion cube.

As designers, we should think economically of the ways we harness technology. If our systems are conceived for human interaction, we additionally should take a look at behaviour and design for it, and not against it. Here too, there are many lessons to be learnt from economics, that expose the perils of assuming a cold rationality from our system’s users. We can then perhaps truly build a better world… by design.